How do microbes alter tolerance of urban stressors in duckweed?

Lemna minor (duckweed) is a tiny, fast-growing, floating aquatic plant that reproduces clonally, yet colonizes ponds across diverse regions of temperate North America, including both rural sites and sites highly impacted by urban runoff. Do microbes play a role in its tolerance of urban stressors? We see that some stressors (zinc, leachate from particles that wear off of car tires) lead to a breakdown in positive outcomes or fitness correlations, but not all stressors cause this. What are the evolutionary consequences of this disruption? and, how can we better predict which stressors might disrupt mutualisms?  See O’Brien et al 2020 on bioRxiv, O’Brien et al 2020 in Microbial Ecology, and O’Brien et al 2019 in the American Journal of Botany.

Lemna minor in a Toronto pond.

The stress-gradient hypothesis (SGH) predicts that some species interactions grade from mutualistic under stressful abiotic conditions to antagonistic or neutral under benign conditions. With my collaborators, I extend these predictions in my (Co-)evolutionary Outcomes of COnditionality (COCO) hypothesis, positing that as interactions become more mutualistic in stressful environments, fitness benefits of interactors become aligned and selection should favor greater mutualistic co-adaptation. See O’Brien et al 2018 in the American Naturalist.

The role of biotic interactions in adaptation to climate

Climate is a powerful force shaping adaptation within species, and creates dramatic phenotypic clines across landscapes. Yet, adaptation to climate does not occur in a vacuum: species interactions filter the fitness consequences of both climatic and phenotypic variation. Climatic stress experienced by a given phenotype may be ameliorated or exacerbated both by the severity of the climate and by species interactions.  The translation of genotype to phenotype also occurs within a biotic context. In addition to selecting on traits themselves, biotic interactions might alter trait expression and influence their additive genetic variance and covariance. The process of selection in such a context may result in adaptive phenotypes that depend on a genotype by genotype interaction with biota to be expressed. See O’Brien et al 2019, Evolution

Together with my co-authors, I test these ideas in interactions between an annual grass species (teosinte: Zea mays ssp. mexicana), and its rhizosphere biota.

Variation in biotic interactions in space

What is the outcome of plant-rhizosphere interactions across climate in the field? Are interactions with mycorrhizae really more beneficial to teosinte at stressful sites? Surveys of colonization paired with ionomics on field samples test if this is indeed the case.

Teosinte is a wild relative of maize, that lives in the highlands of central Mexico. Like maize it is a C4 annual grass and colonist of disturbed open sites. 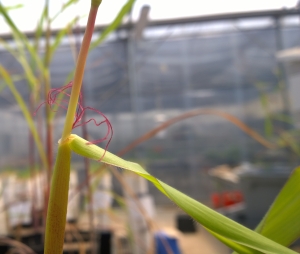